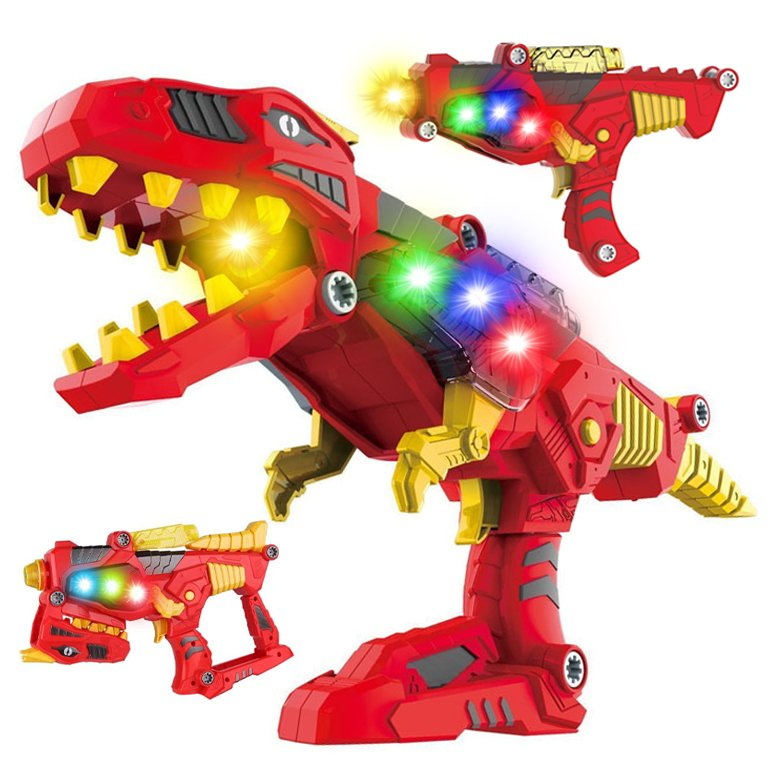 Fight in the ultimate battle with the Dino Gun Space Battle Toy! This light up toy makes sounds and is even interchangeable!

PEW PEW PEW - THE MONSTER DINO BOT FROM THE FUTURE INTERGALACTIC WORM HOLE IS ABOUT TO CAUSE A RUCKUS OF ENTERTAINMENT. PEW PEW PEW

The T-Rex 3-in-1 space blaster is perfect to head into pretend intergalactic battle as it dino gun transforms from an ordinary blaster to a ferocious dino gun by unscrewing the muzzle with the included drill. Designed to spark the active imagination and creative play while role playing. Providing hours of fun, just watch the T-Rex's jaw unhinge and light up along with the side panels as it charges up for epic battle. It even roars! So get ready for battle action day! Your little space ranger's mind will expand with the endless role playing possibilities as they build their own TREX dinosaur toy gun. With it's lively sound and light effects, it's the perfect addition to space and dinosaur themed costumes on Halloween, at costume parties, birthdays or just for pretend play. Made from durable plastic construction yet lightweight as to not weigh down. Tyrannosaurus rex for kids toy gun measures over 15 inches in it's dino gun form! Three AA batteries needed, not included. Toy gun is packaged in a beautiful space battle dino blaster gift box.

This is a great toy for young kids and dinosaur fans! Boys will love using their imagination while learning how to build independently.

WARNING: This product can expose you to chemicals including bisphenol_a_(bpa), which is known to the State of California to cause cancer, birth defects or other reproductive harm. For more information, go to: www.P65Warnings.ca.gov. www.p65warnings.ca.gov