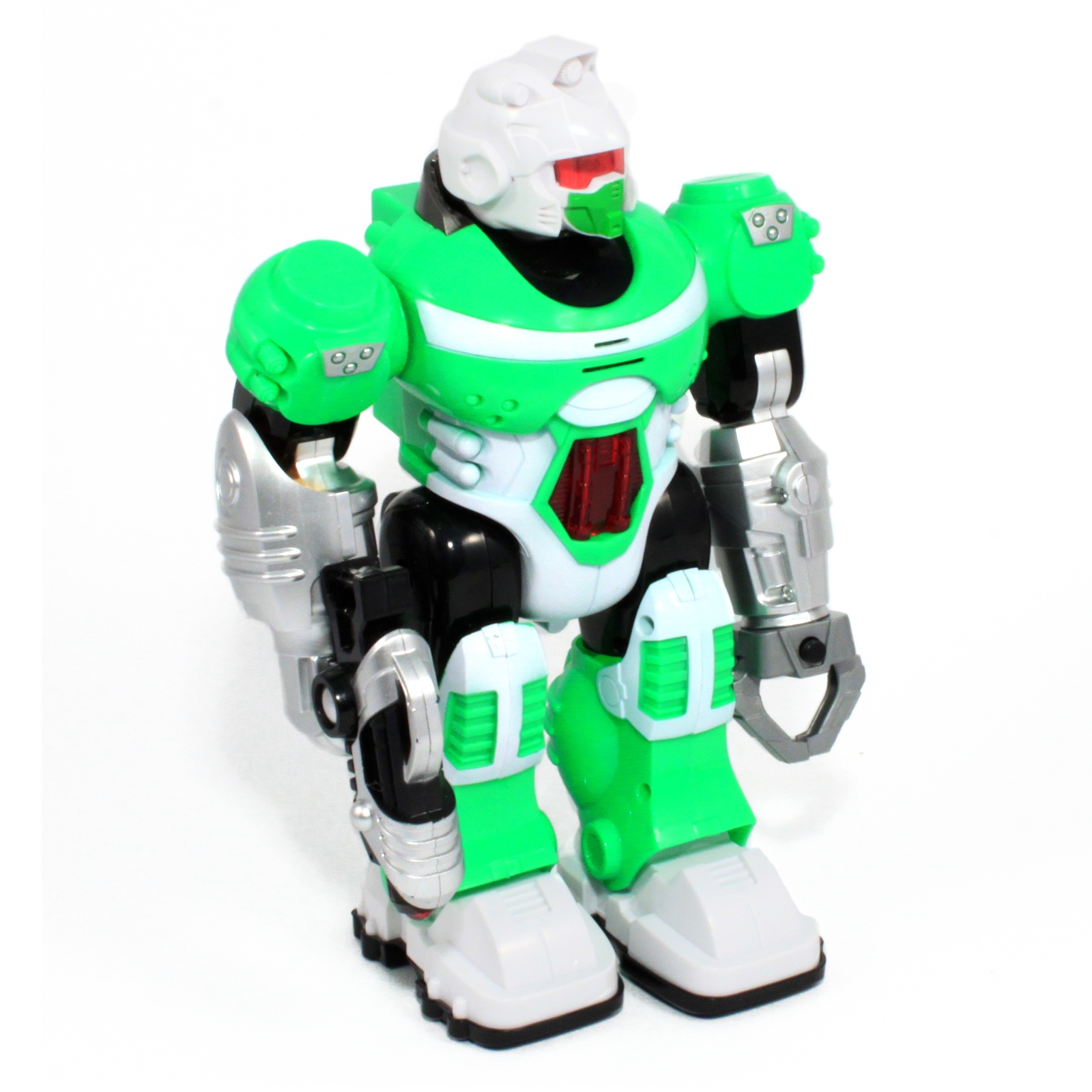 Kidplokio’s Walking Warrior Robot Toys walk all by themselves and feature LED lights throughout the warrior’s armor and on its space blaster gun, as well as awesome battle cries and futuristic laser sounds, taking playtime to the next level! The walking warrior robot toys can walk forward on the attached foot rollers, move both arms and articulate its head from side to side too!

Fight crime, evil villains, or other enemy robots with Kidplokio’s Walking Warrior Robot Toys! Available in an assortment of four colors, red, blue, yellow, and green, your little one will want to collect them all for the ultimate robot battle! The robot toys feature an articulating head and arms, multiple battle cries and awesome laser sound effects, and vibrant red LED lights found throughout its armor and space blaster gun, making playtime even more fun and realistic!

The Kidplokio Walking Warrior Robot Toys move easily across smooth surfaces with built-in rollers under their feet. The simple, easy-to-use design of the futuristic robot allows little ones to engage with their space warrior as it moves forward unassisted! Made of safe non-toxic plastic, these robot toys are ready for an adventure with just x3 AA batteries (not included); no assembly is required.

In one hand of the Robot Warrior toy is a light-up space gun ready for action, and in the other is an adjustable claw that can be easily opened or closed with the press of a button. With an articulating head and arms, the ability to walk and fight on its own, and multiple combat command sounds, the Power Warrior Super Robot Toys will give kids and toddlers endless storyline ideas and hours of pretend play fun.

Suitable for indoor and outdoor use and standing approximately ten inches tall, the Walking Light Up Warrior Robot Toys are the perfect size for ruling the galaxy at home or on the go.

About California Proposition 65 Proposition 65, officially the Safe Drinking Water and Toxic Enforcement Act of 1986, is a law that requires warnings be provided to California consumers when they might be exposed to chemicals identified by California as causing cancer or reproductive toxicity. The warnings are intended to help california consumers make informed decisions about their exposures to these chemicals from the products they use. The California Office of Environmental Health Hazard Assessment (OEHHA) administers the Proposition 65 program and publishes the listed chemicals, which includes more that 850 chemicals. In August 2016, OEHHA adopted new regulations, effective on August 30, 2018, which change the information required in Proposition 65 warnings. This product can expose you to chemicals including bisphenol_a_(bpa), which is known to the State of California to cause cancer, birth defects or other reproductive harm. For more information, go to: www.P65Warnings.ca.gov. www.p65warnings.ca.gov